This is more of a response to critical reviews of The Hobbit DOS than the movies themselves Yes, I know this has probably been done to death, but please bear with me. Unfortunately, I have the inability to let things go, especially if they concern Book-to-Movie adaptations (in general) and The Hobbit + The Lord of The Rings. My Father’s side of the family are huge Book-Nerds, a merit badge that must be earned and worn with pride, especially with regards to the Mighty JRR Tolkien. I swear my family would build a shrine for that man if they could.

Therefore, critiquing of the Godfather of  Fantasy or even the Peter Jackson adaptation of The Lord of the Rings can be meet with cries of “Blaspheme!” or “You have read the whole series right? Including the Appendices, Unfinished Tales, The Children of Húrin, The Silmarillion?” As if JRR Tolkien was the Pokemon of the Literary world, you gotta read em all! To that. I respectfully disagree, I’ll know I’ll eventually get round to them, but at the moment

Besides, to be honest, while I think JRR Tolkien and The Hobbit + The Lord of The Rings aren’t perfect and has noticeable flaws, the main brunt of my ire resides with Peter Jackson instead.
Things I like about The Hobbit: The Desolation of Smaug:

Things I Did Not Like about The Hobbit: The Desolation of Smaug:

Common Complaints about The Hobbit DOS: 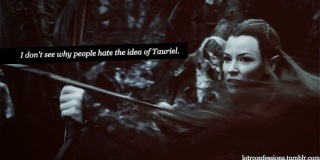 It seems to me that Tauriel has been received well by some fans. I also highly doubt Tauriel would produce such disturbing level of frothing-at-the-mouth rage from Tolkien fans if she were a male instead. There have been two complaints Tauriel’s addition to The Hobbit that I have found make a valid point. And they are these ones that I found at LOTR Confessions.
Problem No.1:

“I’m a little bit irked by the addition of Tauriel in The Hobbit. We don’t need an Elven Warrior-Princess equivalent, we don’t need female eye candy, and we don’t need some bow-wielding Amazon subverting the original plot-line.”

With regards to the First complaint, I respectfully disagree. In fact, we could do with a lot more “Elven Warrior-Princess”, especially in Middle-Earth. The closest thing we had to an actual Elven Princess, who was also a warrior was Arwen, and she went from this (in The Fellowship of The Ring):

Taking on the Ring Wraiths to Protect Frodo with a great big Horse-Waterfall-Thingy, a competent healer and knowledgeable herbalist, amazing horseback rider to this: 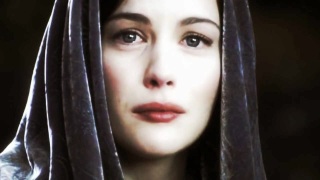 A teary-eyed passive damsel-in-distress who sits around and dose NOTHING but weep and occasionally spouts cliches about how “there is always hope” (there’s a reason why these statements are parodied in Avatar: The Last Air-Bender), while her beau is out and about, saving Middle-Earth from Sauron.

The truth of the matter is that while both JRR Tolkien and Peter Jackson are good at writing action and drama scenes, both of them are fucking awful when it comes to writing romantic interaction between heterosexuals or Female Characterization. There are no women characters at all in The Hobbit and there very few women characters in The Lord of The Rings.

Aragorn and Arwen have pretty much no interaction in the books and their relationship is discussed in the Appendices, the movies are even worse. Their “romantic” scene in the Two Towers when Aragorn accidentally falls off a cliff (for some reason) is a dream, a fucking DREAM! It’s not real, it’s not even god-damn happening! Fans and Canon-shippers go on about how Aragorn and Arwen’s relationship is beautiful and is about endurance, but I don’t have a damn clue as to why these two people are even involved with each other. The only reason I can possibly think of is because Elrond didn’t approve. Through out the movie trilogy, Elrond lists realistic reasons as to why Arwen shouldn’t be romantically involved with Aragorn and her only response it to essentially whine annoyingly “But Daddy he loves MEEEE!“

Why? Because Canon Says So!

Do I hate this pairing? No, I actually have absolutely no emotional bias towards it, I honestly don’t care either way. But what does this have to do with Tauriel? It’s quite simple really, Xenefication is the lesser of the two evils here. No, not every woman needs to be an Action Girl, she just needs to have a real personality with believable character motivations, not a prop for another man’s ego. The problem is until Heterosexual White Men start writing three-dimensional Female characters (and they won’t), women being seen in the media as only the property of men is going to continue (it’s a problem in Real Life as well).

But what I hate, nay absolutely despise and needs to stop happening in the misogyny-ripe world of the Fantasy Genre is PRIS or Passive Romantic Interest Syndrome, where in the relationship the woman/man/submissive/whomever is just a passive object, a prize to be won, for a heterosexual white man to pick up like take-away dinner at the end of the book/movie. The character suffering from PRIS makes no effort in the relationship and just goes along with it for stupid or arbitrary reasons such as Because Destiny Says So, or perhaps no reason at all.

However, the fact remains that I personally like Elven Warrior-Princesses, I like Amazonian Archers messing up Tolkien and Peter Jackson’s Status Quo and I like Tauriel as a character thus far (the Narrative Situation that Peter Jackson has put Tauriel in is another matter all together). I will argue that she isn’t a Mary Sue, ALL Female Elves are trained to heal (it’s their designated job) and ALL elves are trained in self-defense. The problem is limited audience exposure to Elf characters, due to the fact that Action Girls are rare in the Tolkien Universe.

“I am annoyed by the fact that Tauriel will be in a relationship with Kili. I do not understand why we cannot just have a good female character without the need to pair her off with a man.”

Normally, I would agree with this, however, I like Tauriel and Kili’s relationship. They have common interests such as love of family (Tauriel to Thranduil and Legolas, Kili to Fili, Dis and Thorin), love of nature, and a fierce sense of loyalty. Also Tauriel sees Kili as a person with hopes and dreams of his own instead of just a Young Gun Dwarf. The scene between the two of them in Kili’s cell where he talks about how he doesn’t think he’ll be able to keep his promise made me want to cry. Thing is also that while the Plot requires Tauriel to be there, she needs extra character motivation to make her leaving the safety and security of the Woodland Forest believable. People, regardless of race, don’t change unless they feel they have to and personally because “it’s the right thing to do” isn’t reason enough, otherwise Bystander Effect wouldn’t exist.

Character Motivation = Moral Obligation + Emotional Response/Attachment
Now. we have come to the Middle act of the The Hobbit Trilogy and just in the Middle act of The Lord of The Rings, Peter Jackson has the unfortunate habit of adding drama that not only doesn’t contribute to the plot or overall narrative but wastes value screen-time that could be used for more interesting things. Thusly known primarily as… *DRUM ROLL*
Stupid Pointless Love Triangle: 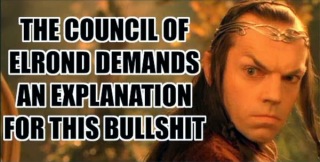 That’s right, in LOTR it was Éowyn-Aragorn-Arwen, this time around it’s Legolas-Tauriel-Kili, supposedly. Which is my main problem with this love triangle. Sure the LOTR was tedious and pointless and we all knew Aragorn had no interest in  Éowyn and was going to end up with Arwen regardless of what transpired

Why? Because Canon Says So

However, the fact is that the LOTR love-triangle had some albeit small evidence for existing. There is no excuse or evidence for the DOS love-triangle. The only evidence that Legolas feels romantically inclined towards Tauriel, is only because of Thranduil’s say-so. First of all, Thranduil is clearly (and perhaps justifiably) mentally unstable, should we the audience be trusting Thranduil’s opinion over Legolas’s actions at this point? Legolas treating her with respect for her abilities and like a person with real thoughts and feelings shouldn’t be interpreted as romantic interest but standard level of behaviour that all men should display towards women.

Frankly, male characters or men in general don’t deserve to get a gold star or cookie of choice for doing what they are already supposed to be doing. Evoking the Love-Triangle trope clearly shows the screen-writers have no idea how to write a “Strong, Independent Female” character, and so instead of just having her there to kick arse and take names, they try to make her a prize to be fought over? How is this not offensive?

Think about this way, if James Bond gets involved in a poorly written and contructed love triangle do you get mad at James Bond or the Script-writers? The Script-writers of course, it’s not the character’s fault it was put in a shitty situation. Tauriel herself said she had no idea Legolas had romantic interest towards her  The biggest problem I have with this Stupid Pointless Love-Triangle is that a romantic relationship between Tauriel and Legolas is NEVER going to happen.

Why? Because Cannon Says So

In fact, at this point there’s far more source-material evidence to suggest that Legolas is romantically inclined towards Gimli than Tauriel.

“When King Elessar gave up his life, Legolas followed at last the desire of his heart and sailed over Sea. We have heard that Legolas took Gimli, son of Glóin, because of their great friendship, greater than any that has been between Elf and Dwarf. If this is true, then it is strange indeed: that a Dwarf should be willing to leave Middle-earth for any love, or that the Eldar should receive him, or that the Lords of the West [the Valar] should permit it.” (Appendix A ‘One of the last notes in the Red Book’, The Return of the King)

Make of that what you will.

So for the love of broccoli, Enough! Please Stop Using Stupid Pointless Love Triangles! Especially to create drama, Think of something else, anything else than this. It’s not just Bad Writing (for I have yet to read a Love-Triangle that was ever well written) it’s worse than that, it’s Lazy Writing and Peter Jackson is better than that. Yes, he is the Director, but he also helped write the script and as Director he has the finale say in what stays or goes in a movie.