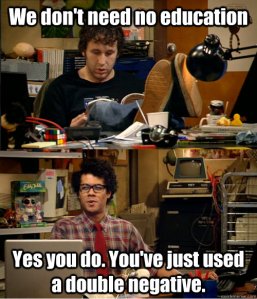 I hesitate with this post because I’m reluctant to complain about a first world problem, especially since there are so many people in different parts of the world actively stopping girls and women from gaining an education

However, I have been reassured that it’s okay to give voice to our struggles, that when we do so, we reassure people that our problems are not as insurmountable as we once thought and that we are not alone.

All my life I have struggled within the Victorian Education system within Australia, and I have struggled not because I have a disability or an intellectual handicap, I could have one, in fact if I had a problem that doctors could label and supposedly therefore give me a solution/medication/therapy for it, I would probably would have had an easier time, however I doubt it very much. The problem is that I struggle to display and work within the Academic System of Education. It’s a domino effect problem, if a student fails to master or fails to properly learn the required skills in Secondary College, then it’s an obvious conclusion that the student in question will also fail to succeed at University. I failed in Secondary College, I ended up having 12 to 15 points taken off my enter score and sure my class grades had reasonable marks for class participation and general tests, but I was awful at exams (which in the end resulted in a poor average overall). Not because I didn’t study but because I couldn’t focus or truly understand what it was that my teacher was asking for. Although to be fair I could have tried harder, I could have traveled to the local library after school and studied there, I also have lazy hermit tendencies and poor time management skills (skills I am still trying to improve).

However, whenever a teacher sat down and explained the problem to me, I got it, I understood what I needed to do, I often think of myself as belonging in the special needs category because I need that extra time and attention to achieve a standard level. However, the secondary college that I attended refused to give that extra time and attention that I needed. I know the reason why of course, I didn’t throw chairs across the room, I didn’t tell people in class I was going to hunt them down and break into their house late at night and stab them in face, I didn’t break into school grounds and smash the school library windows every term holidays. Because while I might get involved in screaming matches with other girls in classes, I didn’t start them to begin with, I didn’t get into physical fights and I didn’t light fires in the toilets. It was easier for my secondary college to give me “Get of Class Free” card rather than deal with the fact that the school had an out of control bullying problem, that I was unable to learn in a classroom and regularly felt physically and mentally unsafe on school grounds the whole time I was there. I was always made to feel as though I was “The Problem Child” but wasn’t given any of the benefits that go along with that (like someone actively helping me to fix said problem). The secondary college figured that they ignored me, I’d eventually go away, and in a way they were right.

What I should have done was leave, if I had left that high school with all my great friends (who happened to not always be in my classes and were of mixed ages) and instead attended another school or perhaps opted to do VCE though the TAFE system instead, I probably would have been more successful and happier. However like most people suffering from Depression and other psychological issues, I already felt I was being a massive burden on my family (as if requesting a safe learning environment was too much to ask for) and that doing one of those options would make it harder for my family. However, there was another reason why I stayed, I couldn’t bear the idea of running away, of letting those who spent their time actively pushing me out of the classroom to get away with it, I didn’t want those girls to win, however in the end the only one who suffered was me, so who really won in the end? Throw yourself against an emotional and intellectual brick wall and the only one who breaks is you, I learned that the hard way.

So in end, it didn’t matter how many times I was tested, how many cat scans or ECG scans I undertook, or how many years in therapy with the under-payed and over-worked psychologists of Orygen Youth Services, after being made to feel as though there was something wrong with me, that I was different and therefore less, it turns out in the end there was nothing wrong with me, I just wasn’t as smart as I thought I was and that I just had to work harder to achieve that standard level. However on the other hand, I was a pretty obnoxious teenager, it wasn’t enough to know that I was right, I had to continuously prove it with “Facts” and “Evidence” and I still have Way-Below-Average Social Skills, as a result I learned a valuable lesson.

**Edited Statement** Allowing racists and homophobic to say whatever they want without consequence or recourse is unacceptable, Homophobic or Racist slurrs in a learning or work environment should never be tolerated or enabled, however be smart about it, know your rights and how to properly deal with situation, don’t take these shit-fights on by yourself**End of Edited Statement

To be honest, it’s taken me a while to learn that particular lesson, to let go of things that are beyond my control, to realise it’s not my job to right every single wrong (perceived or otherwise), how to recognize a toxic and bullying environment when I find myself in one. That last one, is the biggest reason why I feel the Victorian Education system is such a failure. When I left the realm of Secondary Education, I had no qualifications, I had no work experience, and no idea what to do about workplace bullying and workplace sexual harassment, who I could talk to about these problems, what to do if the manager was the one instigating these problems and while I don’t like to slander whole workplace industries, I don’t find it’s all that surprising that the Retail and Hospitality Industries are rife with workplace and administration abuse. The reasoning is that those industries are primarily geared towards women working in a customer service role, and very few people value a role which involves knowing how to interact with people within a certain contextual role, because apparently EVERYONE knows how to do that (no they really don’t, trust me, I’ve seen and experienced some terrible customer service skills). The fact remains that I had to endure two shitty jobs in order to obtain the experience I required in order to apply and gain employment in a stable and physically/mentally safe work environment I have now, one that provides access to a union who I can go to for help if I have problems with work. People underestimate the power and safety of a union presence in the workplace.

I suppose that’s why when I finally admitted to myself who I was (a Writer), what I really wanted out of life (to write novels), and enrolled in the Certificate IV and Diploma of Professional Writing and Editing at Victoria University, it was such a joy to finally walk into a classroom and feel welcome and relatively physically/mentally safe. As a result, I began to accept the possibility of not just doing what I’ve always wanted to do without apologies but also accept the possibility that Happiness could be an unconditional state of mind I didn’t need to be suspicious of. I’m not saying I didn’t continue to struggle, I did and still do, if anything my return into the realm of education has confirmed just how far behind I am in academic and social skills, just how lacking my secondary college was, that I really shouldn’t have been so surprised when I started to achieve good marks for assignments. Failure wasn’t just well known to me, it was expected, the expression “too good to be true” was my survival mantra, with success being a foreign concept I couldn’t quite grasp until I had I actually completed the Diploma, and even now I have yet still to receive it due to Victoria University administration problems.

I suppose that’s why my short story “Open Letter To A Teenager” published in PLATFORM 16 – VU holds such significance for me, at the time I could not imagine someone (especially myself) telling me those words and although I know it probably sounds narcissistic to promote a “It Gets Better” letter I wrote to myself, but I feel those words needed to be said, because for me it did get better, because for many people it doesn’t get better or it’s a constant battle. However, I have an awesome group of friends I have managed to hold onto from Secondary College, I have brilliant new friends I’ve somehow managed to mysteriously acquire through TAFE. I have a loving and devoted partner who loves and supports me despite how much a screw-up I am. Somehow, it seems selfish and greedy to ask for more, but I’m going to ask anyway, I want more.

Maybe this is the reason why I write, because people have tried so often to silence me, because people only paid attention when I screamed and shouted but still couldn’t hear what I trying to say, and while I don’t think spite is the best kind of self-motivation, it’ll have to do for now.

**Please let me know if I’ve made it worse, apologies in advance

5 responses to “Another Brick In The Wall”