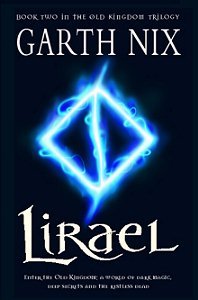 About The Book:
“Lirael has never felt like a true daughter of the Clayr. Now, two years past the time when she should have received the Sight that is the Clayr’s birthright, she feels alone, abandoned, unsure of who she is. Nevertheless, the fate of the Old Kingdom lies in her hands.
With only her faithful companion, the Disreputable Dog, Lirael must undertake a desperate mission under the growing shadow of an ancient evil.
In this sequel to Sabriel, winner of the Aurealis Award for Excellence in Australian Science Fiction, New York Times best-selling author Garth Nix weaves a spellbinding tale of discovery, destiny, and danger.”

Aspects I Liked and/or Enjoyed
~A Lack there of Female Protagonist Problems: Like with Sabriel, Lirael is an interesting main character devoid of internal or external sexism, which is a departure from my usual reading (yay?)

~Interesting Plot and Characters: Though I understand the reasoning behind the Changing of the Guard, I would have liked to read more of Sabriel and Touchstone, however I found Lirael’s plot enjoyable and intriguing. Librarians should get the chance to be Heroes too. I’m also a big fan of the Disreputable Dog, especially when she and Mogget interact

~eBook Cover: I have the plain paperback version of Lirael, which I like, but I also like the ebook cover too.

Aspects I Had Problems With
~I Just Want to Be Normal: Lirael and Sameth are a little whinny in the beginning about their respective roles, however their emotional/psychological problems are understandable and both of them do undergo serious character development as a result

~There Are No Therapists: Lirael has been suffering from depression for years, twice she seriously contemplated suicide, none of the Clayr noticed, only the Disreputable Dog did. Sameth has clearly been suffering from depression and Post Traumatic Stress Disorder, nobody notices this or offers to have a chat about the incident or give him any space. You’d think with occupations as traumatic as lawful-good necromancer and oracle you would make sure to keep tabs on people’s state of mental well-being

~Single Line of Inheritance: The Abhorsen Role is very much like the Vampire Slayer Role, there’s only ever one Abhorsen in a active postion, but unlike the Slayer role, that doesn’t have to be case for the Abhorsen Role. Unlike the Clayr, who are large in number, The Abhorsen line and The Royal Blood-Line are very fragile, it makes me wonder what where they going to do if Sameth refused to be the Abhorsen-In-Waiting and Lirael hadn’t shown up.

~The Academy of Death: From what’s been shown in the Old Kingdom books, if you need a genetic disposition to be able to wield the belles and walk into Death, how are there other necromancers outside of the Abhorsen lineage? More importantly, how do these other necromancers know more than the protagonists do? I get that Sabriel and Lirael have been raised outside their native environments, but that doesn’t explain why other necromancers are so far ahead. Is there necromancy apprenticeships available or Undead High School? I can just imagine all the puns involved, like how the curriculum is to die for