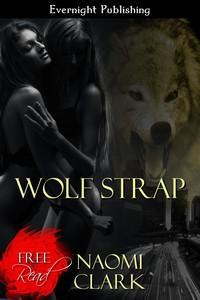 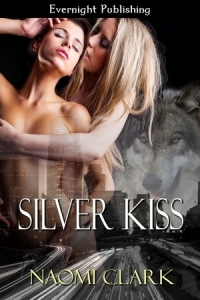 About The Author:
Naomi Clark lives in Cambridge and is a mild-mannered office worker by day, but a slightly crazed writer by night. She has a perfectly healthy obsession with giant sea creatures and a preference for vodka-based cocktails. When she’s not writing, Naomi is probably either reading or watching 80s cartoon shows, and sometimes she manages to do all three at once.

About The Book (Wolf Strap):
When loner werewolf Ayla Hammond returns to her home town for her cousin’s funeral, she thinks the worst she’ll have to deal with is her prejudiced parents meeting her human girlfriend. But when the grisly truth about her cousin’s death emerges, Ayla finds herself facing a monster that shouldn’t exist. A monster even a werewolf might be powerless against.

About The Book (Silver Kiss):
Ayla Hammond has come home. After years as a lone wolf in a self-imposed exile she’s rejoining the pack and trying to mend fences with her parents. She’s convinced them to accept her girlfriend, but can a lone wolf change her ways? As if homecoming wasn’t hard enough, Ayla also can’t help getting involved in a missing person case. With pressure to solve the case mounting from the pack alphas, Ayla is starting to question where her loyalties lie – and if a return to the pack she left behind is really what she wants.

General Observations:
~Wolf Pack: Wolf Pack is a free downloadable EBook, however because of its short length I didn’t feel I could justify devoting a whole post, so I decided to review both books together. While you don’t have to read Wolf Pack and Silver Kiss in order, I highly recommend that you do.

~Cover Art: While I have no problems with Lesbian Werewolf Smut, the book doesn’t actually contain that much smut, maybe a couple of scenes which were well written but completely organic to the narrative. You all know the saying, don’t judge a book by its cover, which is especially true for Wolf Pack and Silver Kiss.

~Romance Sub-Plot: I loved reading about Ayla and Shannon’s relationship, both are interesting three-dimensional characters, the relationship drama while influential to the overall plot doesn’t take over the narrative and is relative to the story-line. To be honest, I think this is a great go to example of how to write a great werewolf/human relationship. Ayla is honest with Shannon about her Werewolf abilities (and family history) and Shannon is completely accepting of this and there’s no turning Shannon into a Werewolf against her will (the werewolf situation being genetic, thus making it impossible). While Ayla does need to be careful around Shannon because werewolves are physically stronger than humans, there’s no power dynamic at play here.

~Great Characters and Narrative: Shannon is a Private Investigator and she and Ayla work together to solve cases, which I love because I’m a big Crime/Mystery fan. I also love Ayla’s friends Joel, Vincent and Glory (especially Glory). There’s a Mystery to solved and Bad Guys to beat up (and yes Ayla kicks arse and it is good). What more could you want? And yes, I got a little teary at the end of Silver Kiss when all the characters are having a massive group hug, the feels got to me.

Overall, a great read, excellent writing and I’m looking forward to more in the series.