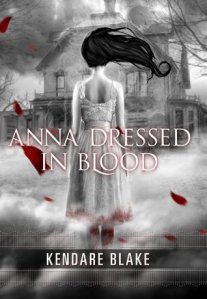 About The Author:
Kendare Blake is the author of several novels and short stories, most of which you can find information about via the links above. Her work is sort of dark, always violent, and features passages describing food from when she writes while hungry. She was born in July (for those of you doing book reports) in Seoul, South Korea, but doesn’t speak a lick of Korean, as she was packed off at a very early age to her adoptive parents in the United States. That might be just an excuse, though, as she is pretty bad at learning foreign languages. She enjoys the work of Milan Kundera, Caitlin R Kiernan, Bret Easton Ellis, Richard Linklater, and the late, great Michael Jackson, I mean, come on, he gave us Thriller.
She lives and writes in Kent, Washington, with her husband, their two cat sons (Tybalt and Tyrion Cattister) and their red Doberman dog son, Obi Dog Kenobi.

About The Book:
Cas Lowood has inherited an unusual vocation: He kills the dead.
So did his father before him, until he was gruesomely murdered by a ghost he sought to kill. Now, armed with his father’s mysterious and deadly athame, Cas travels the country with his kitchen-witch mother and their spirit-sniffing cat. They follow legends and local lore, destroy the murderous dead, and keep pesky things like the future and friends at bay.
Searching for a ghost the locals call Anna Dressed in Blood, Cas expects the usual: track, hunt, kill. What he finds instead is a girl entangled in curses and rage, a ghost like he’s never faced before. She still wears the dress she wore on the day of her brutal murder in 1958: once white, now stained red and dripping with blood. Since her death, Anna has killed any and every person who has dared to step into the deserted Victorian she used to call home.
Yet she spares Cas’s life.

General Observations:
~Interesting Narrative: I really like the narrative situation, people die, there’s a massive plot twist and the lone-wolf main character figures out he’s an arsehole and needs friends, and it’s through the power of friendship that the “bad-guy” gets defeated (which I approve of). Speaking of the “bad-guy”, I’m glad that the author is mentioning different cultures, I felt the author could have gone into more details about Voodoo, but then again the narrative pacing is fast and keeps the reader on edge so there might not have been time for Voodoo 101 lesson.

~Engaging Characters: I loved Thomas, I just wanted to pick him up and hug him like the adorable puppy he is. I also liked how Carmel is included as a character, on the surface she appears to be the stereotypical Queen Bee, but she’s actually a good person and is nice to people, she even got a pretty good action scene as well (never underestimate the power of a metal baseball bat, even if you’re dealing with ghosts and whatnot). There’s also no love triangles at all, Huzzah!

~World Building: The setting Thunder Bay could have used some more description and world building, the reader was only ever exposed to four places: Home, Antiques shop, Anna’s Place and School. Thunder Bay is set in Canada but I honestly could not have told you that, but then again Australian media is so over-saturated with US orientated media, so most people assume that Canadian schools and schools from the US are exactly alike, and I don’t think that’s the case.

Overall, great book really enjoyed it and I’m looking forward to the next book in the series Girl of Nightmares