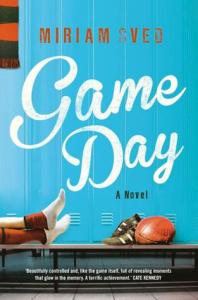 About The Author:
Miriam Sved is a Melbourne-based writer who grew up in Sydney, where she was largely oblivious to football or sport of any kind. Game Day is her first published novel. Her fiction has appeared in journals and anthologies including Meanjin, Overland and Best Australian Stories, and she is a contributing co-editor of the anthologies Just Between Us: Australian writers tell the truth about female friendship and Mothers & Others: Australian writers on why not all women are mothers and not all mothers are the same. She has a PhD from Melbourne University, where she sometimes teaches creative writing. She also works as an academic editor and a parent.

About The Book:
The new draft pick, the tired has-been, the up-and-comer, the might-have-been. The talent scout, the coach on the edge, the beleaguered umpire, the concerned medic. The number-one fan, the lifetime members, the desperate gamblers. The footballers’ mums, the WAGs, the groupies. The tags, the rivals, the sledging. The pressure. Mick Reece and Jake Dooley, best mates since childhood, begin their first professional season playing AFL with little notion of what they’re getting into: the complexity of the beast that the game must feed.

In Game Day, Miriam Sved brings this beast into the light over the course of one season of Aussie Rules. What unfolds is a deeply insightful novel about the pathology of an AFL club, its players and its fans. Revelling in their battles, their victories and their relentless interdependence, Game Day asks whether what unites the true believers is stronger than what divides them, and if love of the game can transcend our flaws and imperfections to result in something beautiful.

Sved’s debut novel is a poignant and clear-eyed exploration of what sport means for Australians, and the intensity with which we pursue and cherish it.

~Aussie Rules: I most certainly think this is book written by an Australian writer for an Australian audience. However, the reader doesn’t need to be a proficient expert with regard to the Australian Football League (AFL) to understand the novel (I’m certainly not), if the writer were to substitute AFL for another high pressure/high media focus sport like soccer or tennis, you could create similar results with the over-arching narrative of Jake and Mike.

~Short Story Collection: While the subtle over-arching narrative of Jake and Mike flows through the various chapters, I did feel that this novel was more like a collection of short-stories. Although I did enjoy how all the short-stories subtly inter-connected, all the character’s stories subtly building on top of each other.

~Preaching To The Choir: I also think this book is written for a specific Australian audience in mind, those who enjoy AFL but perhaps lack the critical ability to stand back and acknowledge the flaws in AFL culture objectively. People who take literature studies at university, like myself, generally have the ability to analyse such a prominent aspect of Australian culture and be able to offer the pros and cons.

So while the book was well written, this novel was difficult for someone like myself to read, as I have no interest in sport in general and no interest in AFL (I often despise the way AFL dominates a lot of Australian Media), I am already well aware of the negative cultural aspects that AFL promotes.

~Representation Matters: Regardless of whether I relate to narratives involving AFL, Australian writers are probably going to keep writing about it. It’s great thing that Australian writers are pointing out the flaws such as racism within AFL culture. Other books I can recommend are Deadly, Unna? and Nukkin Ya by Phillip Gwynne (though these two books are more geared towards a Young Adult audience).

In conclusion, while The Game is well written, it’s more character orientated than plot orientated and it discusses a subject that have little to no interest in, however it gives readers the opportunity and the platform for having the much-needed conversation about the occasionally toxic nature of ALF culture. I also see why it should be recommended as Secondary College reading