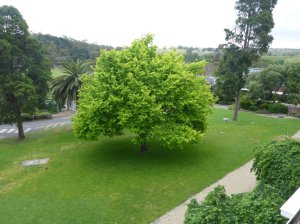 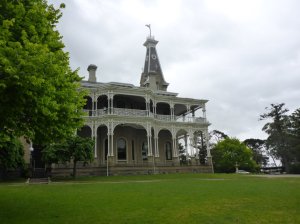 The Twilight School is located at the Rupertswood Mansion, which is on the grounds of the Salesian College in Sunbury and has been the host of many author events. Some of these events have been engaging and entertaining such as A Night with Rosalie Ham (author of The Dressmaker). Some of these events have been cathartic and validating such as the Three Personal Perspectives on Mental Health forum. One session was about taking that frightening step towards healing from sexual abuse such as when Bruno spoke to Francis Sullivan (CEO of Truth Justice Healing Council).

But this session in particular was about saying farewell to Bruno before he leaves for Indonesia, a pilgrimage he has been regularly undertaking since he was a teenager, and was eager to learn the language to impress a young lady. 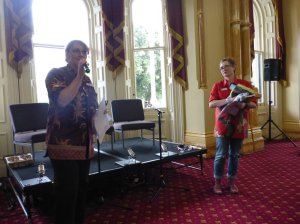 Lisa J Cole (author of Six Backpacks: a journey through Vietnam) and Bernie Hetherington took over as hosts and Mistresses of Ceremony, while they both channeled their inner-Bruno, greeting people with hugs and declarations of “Ciao!” at every possible opportunity. 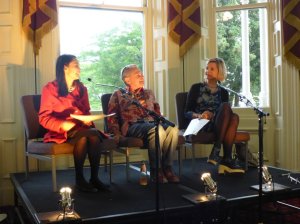 Meanwhile Ailsa Piper (author of Sinning Across Spain), Sofie Laguna (author of The Eye of The Sheep) and Alice Pung (author of Laurinda and editor of Growing Up Asian in Australia) took turns interrogating Bruno, I mean, discussing with Bruno about various topics such as his life and his achievements.

Bruno, a man who always had his eye on the letter-box, spoke about his family and his father’s passion for gardening (“My gardens are metaphorical gardens, a garden of the mind.“), and even though he grew up in a bookless house, his parents still valued education immensely and eventually, education became a special interest (alongside many others) that Bruno became passionate about. As mentioned before, as a teenager Bruno got a job in a bookstore and became infatuated with the store-owner’s daughter and he “followed her around the store like a puppy”. Because she only spoke Indonesian, this led to Bruno actually going to Indonesia, with little to no knowledge of the language when he first arrived. But this didn’t stop him from integrating with the community. Bruno has always possessed “such a great sense of belonging”.

Bruno continues to regularly visit Indonesia and teaches classes on how to learn Indonesian language in Australia. Bruno spoke of the cultural differences between the Indonesian and Australian education systems, such as “Students love to be remembered” and Indonesians have a great respect for their teachers. Normally teachers stand still at the front of the class and lecture from a podium. Bruno felt this wasn’t his style, and he would often wander among the rows of students and engage with them in a more direct fashion, he “hated the idea of boring the students to death.”. Although Bruno is dismissive of his influence, I feel this is ultimately disproved, mostly because when years later when he has returned for a student/teacher reunions, students still remember him fondly and desired to be remembered in turn. When he was asked by a student if he remembered her, he replied with “Oh yes, I remember you, you’re… you’re the cheeky one!”.

I find it easy to believe that Bruno is memorable. My first memories of Bruno is of him coming into a classroom while I was still undertaking the Certificate IV and Diploma of Professional Writing and Editing. He was a small bundle of warm energy and enthusiasm. He was in there to let students know about Platform and then he encouraged all of us to submit something for the magazine to publish. There was no doubt in his voice of our talent or potential, that all we needed was the right opportunity and encouragement to follow through, and he was right. Writers, myself included, are at times such fragile creatures, and we often need that extra push to get us moving in the right direction.

Bruno’s verbosity and confidence are well-noted characteristics, which was why I was taken aback when Bruno said that when he went through university, he didn’t talk at all. Though it does make me wonder how he managed to become president of the Indonesian language club at university. Bruno spoke of how he went to a lunch time meeting and came out president. At this point, Ailsa noted how Bruno was a gatherer of people, that he seemed to create a community wherever he went and, upon looking around at the sheer variety of audience members in attendance, I had to agree with her.

Sofia also noted that Bruno worked frequently with Writers, who require a high degree of solitary space to perfect their craft. Ailsa, Alice and Sofia noted that Bruno also had the unusual talent of being able to coax out the solitary-prone writers and actively engage with them and their craft. I nodded in agreement as I frantically attempted to scrawl down notes. During the Rotunda In The West Events, I had observed Bruno’s talent for taking a possibly mundane subject, and make it interesting and engaging. Bruno replied that he wanted only to ask writers whose work spoke to him, and that he wanted to turn that solitary craft and make it into a reflection of their work.

This naturally lead to Ailsa asking how Bruno managed to persuade people to go along with his projects and his ideas? Bruno described his process for recruiting writers for his author events as going for a walk, occasionally chatting to people (“I know I look like I haven’t a care in the world”) and he thinks “how do I go about doing this?” and he mulls it over. He eventually came up with the idea that it would be great to collect all these writers together, and have discussions with them.

I assumed that he meant that being able to discuss something with another person allowed him to understand the problem. Ailsa also brought out a copy of the Open Letter Bruno wrote (link is here) and read a portion of it to the audience. Bruno confessed that it felt very disconcerting having his words read back to him. The audience (mostly comprised of writers) laughed, myself among them, as I too was familiar with the sense of unease that occurs when someone reads your work out loud, and not knowing how people will react.

Bruno was then asked, “Why do you have these conversations about being a good man?”

Bruno explained that his primary goal was to focus directly on the conversation, not do a thing or a hobby and have the conversation around that. It was clear that providing a good example was important to him. Bruno spoke of how it wasn’t standard for men to talk or to emote, and how he wanted more than that for his sons (“I want my boys to be big-hearted men”), so he lead by example. Even if that meant being embarrassingly enthusiastic at lacrosse games.

Bruno spoke of his and Barry’s friendship, which is both admirable and a little enviable. Bruno recalled how they met through Victoria University’s Adult education course and how he managed to convince Barry to read his work to these year 10 secondary college boys, which was met with a positive reception. As Kim said later in the car on the way home, it’s glorious how secure Bruno is in his masculinity and in his own skin. The world (but especially a place like Sunbury) needs more men like Bruno and Barry. Men who aren’t afraid to care for each other and aren’t afraid to express themselves.

Personally, I find Barry’s articles relatable (links are at the top of the page), and Barry’s words are exactly the right kind of words for young men to hear (they’re the right words for anyone really). I feel Barry demonstrates the struggle not just with Mental Health issues, but with society’s unfair standard that productivity equates to value. When Bruno spoke of visiting Barry in the psyche ward, he said it was a scary experience. To me, the absence of fear isn’t bravery, that true bravery is perseverance in the face of fear; of continuing despite the odds or the obstacles.

This same bravery was evident when Bruno mentioned the session where he spoke to Francis Sullivan (CEO of Truth Justice Healing Council). The first question Bruno asked was “Is it appropriate to be having this conversation here in the Rupertswood Mansion?”, the location where sexual abuse has occurred. We live in a in a society that still refuses to acknowledge that sexual abuse occurs and, in my subjective opinion, forcing victims and survivors to pretend that an incident of sexual abuse never happened is emotionally traumatizing. So, I was glad that Bruno was brave enough to host the event in the first place, but also to ask such a question straight away (“Conversation isn’t just pleasurable, and this topic is so hard to talk about.”).

It’s the job of a Writer such as myself to navigate out into the Ocean of Imagination and Possibility, but I’m also certain that it is the job of people like Bruno Lettieri to act as a Lighthouse, a guide back to the Shores of Reality. Perhaps, this time, we will be Bruno’s Lighthouse.

“You need to run out into the world, just get moving, we should all have a moment when we run through a banner and cheer on those who haven’t been cheered on before.”

“I really like the letter, we’re all letter writers really and if you’re going to write, you’ve got to be a dreamer and be able to cuddle up with your own thoughts. You are your own first audience.”