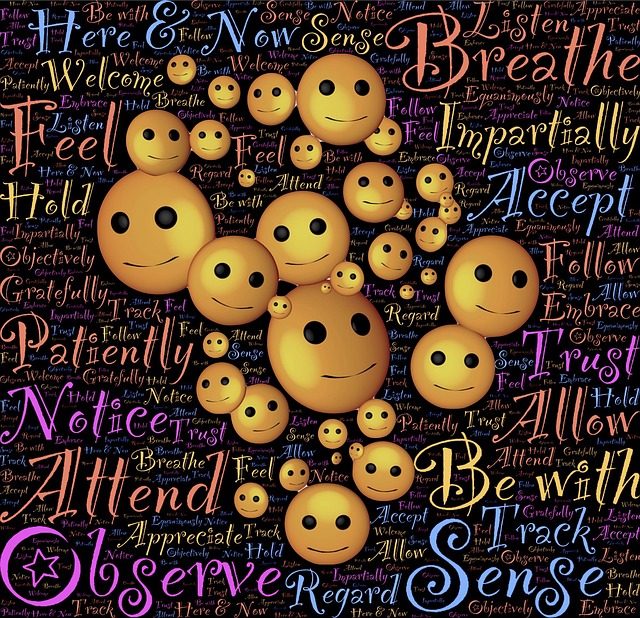 Image Description: a large cluster of smiley faces in the centre of the picture. In the background are words like breath, here & now, accept, track, sense repeatedly printed in the background over and over again.

Welcome to The Dysfunction Junction, a series of blog-posts I am going to write as I try to figure out whether or not I have ADHD or if I am just Weird. Now, I know some people will object to my use of the term Weird, but as I have spent my entire life being made to feel Less because I am Different, I think at this stage I’m entitled to reclaim Weird and Crazy if it so pleases me. Especially since every time I try to figure out what that precise Difference is exactly, I have been (and continue to be) denied access to a label and a diagnosis, and therefore to services that could potentially help me handle my Dysfunction.

Instead, I am left with labels like Weird, Crazy, Freak and Broken by default. But I am not Broken, I am not Less, and recently Kim gave me another word, a glorious inclusive word that matches me, and that word was Neurodivergent. It was in a Tumblr post, but unfortunately, I cannot find the direct quote (I have been looking through Stim Toy posts trying to find it) so I will be paraphrasing here, but it was essentially along the lines of:

“From what you’ve told me about your experiences in general and your experiences with mental health, you’re not Neurotypical, you definitely sound Neurodivergent, and you’re welcome to play in our sand box.”

It will sound silly, but I almost began crying when I read Kim’s response, I was so happy not just because of Kim’s acceptance but for the underlying message of “it’s okay, I see you, and you don’t have to pretend to be normal.” Because for most of my life I have been trying and mostly failing to adhere to the role of “Normal Person” without a script. I am not “normal” or Neurotypical, I never will be, so naturally I keep failing and beating myself up about it (if everyone else can do it, why can’t I?), although my failures as an adult are small and possibly dismissive in comparison to the failures I committed as a child and teenager. I have learned how to blend or appear “normal enough” by rote, not because it comes naturally to me, socialising and interacting with other people is hard work for me.

These posts are not to function as a self-hosted Pity Party, but rather to act as a guide for other people who might be considering the same type of options as I am. But as I live in Australia, I have limited access of Australian doctors qualified to assess Adults with ADHD, and the Australian Medicare System also limits me, my approach will be primarily Australian-orientated (just in case that wasn’t obvious).

But I would also like to mention up front that the diagnostic criterion for an Adult with ADHD is similar to an Adult with Autism or Adults belonging to the Autism Spectrum. While I don’t think I have Autism, I can’t deny the possibility that I could be Autistic instead of having ADHD, although I think it’s unlikely. There is also the possibility of having both ADHD and Autism, although I think this also unlikely, if I had both, surely someone would have noticed or said something before now (maybe? I think? At this point I really don’t know anymore), however, having said that, I have often found resources or articles for people with Autism to be helpful for me.

Concerning Autism and ADHD support groups, there is a lot of focus on international organisations like The National Society of Autism (located in the UK) and Global and Regional Asperger Syndrome Partnership (GRASP) (which is predominantly located in the USA). I’m sure both these groups do amazing things for Neurodivergent people in their respective counties, but their helpfulness is limited in international situations like mine.

Amaze (formerly known as Autism Victoria) doesn’t get nearly the same amount of attention as GRASP or The National Society of Autism, although Amaze does produce a magazine The Spectrum (if anyone is interested in contributing to it). I have found that Wrong Planet and Autism Women’s Network are more internationally friendly or more internationally appropriate.

On the ADHD front, I found valuable articles and resources at ADDitude Magazine, but for something more Australian orientated, I have also found this website Every Day with ADHD which has resources for parents and children for different states in Australia but also in New Zealand.

The key objective here is to help and to inform, so at this point I want to add the obvious disclaimer that I am not a qualified or experienced medical professional. I cannot and will not offer a diagnosis for Autism or ADHD, however, I will add resource links at the bottom of the page, and what you do with them is completely up to you. If someone out there stumbles across my blog and finds this helpful, then great, otherwise this is just going to be me ranting about how messed up the Australian Medicare System is and just how lacking the Mental Health services available in Australia are.

~ADDitude Magazine: The Truth About ADHD in Women

~ADD on my mind: diagnosing attention deficit disorder in adults by Yasmin Noone

~The link between autism and trans identity By Bryony White

~The Chameleons: women with autism | The Feed SBS (YouTube Video)

~Different As Pie: So You Think You Have Asperger Syndrome? (Youtube Video)

~Musings of an Aspie: Aspie Tests

~Nerdy, Shy and Socially Inappropriate: A User Guide to an Asperger Life by Cynthia Kim

~Bitter Autistic (Tumblr): a collection of quizzes and other tools to help with self diagnosis as well as tips and tricks for ADHD