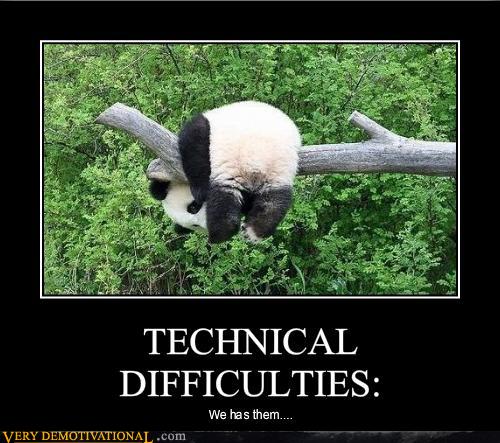 Image Description: a “Very Demotivational” meme, which is a picture of a panda trapped on a branch, with a black border around the picture with white-text captioning down the bottom of the picture: “Technical Difficulties: We has them…”

I’ve been thinking of starting up (surprise, surprise!) another writing project, the big problem is that I’m currently torn between what kind of platforms I should use, I don’t know if my intended project is more suitable for Podcasting, a YouTube Channel or perhaps a combination (somehow?). Perhaps I should discuss my new writing project and maybe it’ll help me with he decision process. I want to set up a platform where I talk about Mental Health and ADHD (as well as some related topic things like stim toys). As I’m not a qualified therapist or counsellor, I would only be able to talk from the podium of my own experiences, so the video path would involve journal-like videos talking about my diagnosis, my personal diagnostic process, as well my interconnected mental health problems.

I’m going to be honest, YouTube has a large market on the “journal/confession” style of video, and while that results in great content like Katie Morton’s YouTube Channel and Annie Elainey’s YouTube Channel, it leaves me wondering “What do I bring to the table that is unique and different?” and “how can I possibly stand out?” See, the funny thing is that there is a lot of ADHD journal-style channels already out there, usually they have ten videos and then they haven’t been updated since or they have been updated but there are irregularities in postings or big gaps.

The problem is that I understand only too well why that is the case, I’ve been doing the same thing too pretty much all my life and I don’t want to do that anymore. I don’t want to embark on yet another project, invest a lot of my time, effort and limited financial resources into a platform only to give up half-way through. And, yeah, I’m perfectly willing to admit that my scatter-gun approach to… pretty much everything might be apart of the problem. My usual method of throwing things at a platform and seeing what sticks isn’t working for me or isn’t working as well as I’d like it to. It’s not that I’m not willing to give both a go, its not that I’m not willing to take risks, what I’d like is some feedback before I make the attempt.

What’s the Project going to be about?
My objective is create channel (regardless of whether its YouTube or Podcast) that covers the following:

I suppose I should include the possible pros and cons of each platform.

Problems that would affect both projects:

Maybe this is something I need to think about for a little while longer, however, I’d really appreciate it if readers could let me know what they think. Is this something you’d be interested in? Would you prefer YouTube or would you prefer a podcast? What about a combination of the two? I don’t know, I’m just putting ideas out there. If you’d like to check out my introductory video for my channel, the video is just below: