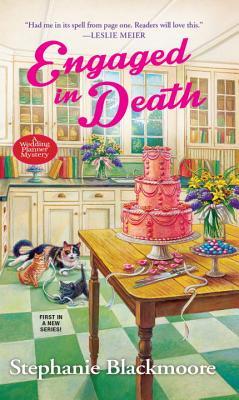 Image Description: the book-cover of Engaged in Death by Stephanie Blackmoore. The cover of the book consists of a colour illustration of a country-style kitchen, white kitchen cabinets and white benches in the background, with a wooden kitchen table in the foreground. On top of the table is a pink frosted tiered-cake, it looks like a giant pink wedding cake. The floor is a white-and-green checked pattern with three cats on the floor: one cat is a calico cat, one is a ginger kitten, and the other is a jet-black kitten.

About The Author:
A native Pittsburgher, Stephanie now lives in Missouri with her husband, son, and twos cats. She was an attorney and a librarian before becoming a writer. Stephanie is a fan of snow, strawberry-rhubarb pie, and the colour yellow. She is hard at work on her next novel.

About The Book:
All appears peaceful in sleepy Port Quincy, Pennsylvania–but in this small town, old grudges die hard.

After dumping her cheating fiancé and cancelling the wedding, Mallory Shepard can’t bear another disaster. So when the former bride-to-be unexpectedly inherits Thistle Park, a ramshackle mansion in her ex’s hometown of Port Quincy, it’s a problem she can’t afford–literally. Abound with stray cats, peeling wallpaper, and nosy neighbours, Mallory is dying to sell it off–once she finally fixes up both the place and her messy life.

Turns out, Thistle Park has its charms. But the honeymoon phase is abruptly cut short when an unwanted visitor is found dead on the front lawn. Enlisting the help of her sister Rachel, Mallory vows to unveil the killer before she herself becomes married to the suspect list…

General Observation:
~Readability: Engaged in Death is an easy novel to read, it has excellent pacing and a great mixture of plot and character. It was easy to immerse myself in this narrative and I devoured this novel quickly. As I’ve been dealing with a reading slump, I hesitated in starting a new series, but I think this may have helped with my reading quota.

~Plot vs Character: Engaged in Death sits slightly more towards the character side of the spectrum, however, it’s definitely a close call. When it comes to plot and character, usually writers favour one more strongly than the other, but Stephanie Blackmoore managed to blend them together in an almost even manner.

While there’s a lot of character exploration of Mallory (from over-compromising finance to a confident woman-scorned healing from a bad past relationship) and her sister Rachel (Jack of many Trades but Master of None), the narrative never gets too heavy, but it doesn’t gloss over the stressful and emotional parts either. The author paints broad strokes of their childhood and it’s easy enough for the reader to fill in the details.

For me, while the main characters need to be engaging and active, there’s no point having good character development if your plot elements are mediocre. A good Crime and Mystery novel runs on good plot-elements and the author provides good plot elements.

The clues are all there, but it’s not obvious (at first) how all the clues come together. While the main case was wrapping up and characters were letting their guard down, I felt that there were some loose ends that still needed tidying up, and then BAM! Those loose ends were acknowledged and then tied up in a satisfactory manner.

~Romance Sub-Plot: While I didn’t object to the romance between Mallory and Garrison, it also can’t be denied that the narrative catalyst is Mallory ending a six-year relationship, although Mallory does acknowledge this and lampshades the situation. I can’t deny that I have mixed feelings about this sub-plot. It doesn’t take over the novel, it sticks strictly to the sub-plot lane but one could argue a case against it.

To me, the novel would still have worked if the characters had decided not address the romance between them, after all, there were acceptable reasons for them not to date. In defence of the romance sub-plot, Mallory and Garrison take things slowly and, to be honest, Mallory ends up spending more time with Summer (Garrison’s daughter) than Garrison, although I view this as a good thing.

In conclusion, an engaging narrative with interesting main-characters and side-characters, I look forward to reading the two books in the series: Murder Wears White and Murder Borrowed, Murder Blue

3 thoughts on “Book Review: Engaged in Death by Stephanie Blackmoore”