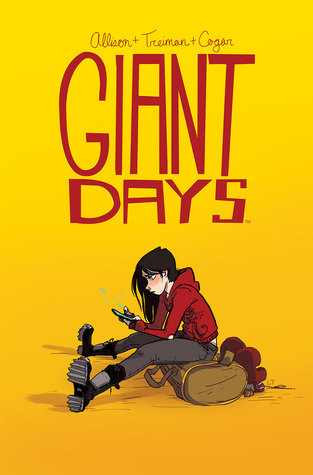 Image Description: the book-cover of Giant Days – Volume 1 by John Allison. The cover has a yellow background and the title text of Giant Days and Creator credits written in red sans-serif font up the top of the page. In the foreground is Esther, one of the main characters. Esther is a young lady with pale white skin wearing a red jumper, grey pants, and black combat boots. She’s sitting on top of a gym bag, a pair of red boxing gloves are sitting nearby, and she’s looking down at her phone, reading something on the screen.

About The Creator:
John Allison: John Allison is the author and artist of the British webcomics Scary Go Round and Bad Machinery.

About The Book:
Susan, Esther, and Daisy started at university three weeks ago and became fast friends. Now, away from home for the first time, all three want to reinvent themselves. But in the face of handwringing boys, “personal experimentation,” influenza, mystery-mould, nu-chauvinism, and the willful, unwanted intrusion of “academia,” they may be lucky just to make it to spring break alive. Going off to university is always a time of change and growth, but for Esther, Susan, and Daisy, things are about to get a little weird.

General Observations:
~Contemporary: This is a contemporary graphic novel, so it really does focus on how events make characters feel, rather than the events themselves. This is fine if it is done well and the Giant Days team does it well. It’s a fluffy novel that’s enjoyable, it does have its small moments of pain, however, that’s to be expected. Susan, Esther, and Daisy may be adults but they have a lot of learning to do. I like how the novel focuses on that feeling of being old enough to (sort of) take care of yourself but young enough to still make mistakes (and learn from them).

~I Found This Humerus: While there are many positive elements to the graphic novel Giant Days, it’s the humour I enjoy the most, the three main characters Susan, Esther, and Daisy bounce off each other perfectly (and occasionally lean on the fourth wall), together they compensate each other’s strengths and weaknesses.

~Art Style: I quite enjoy the art style of this comic, it’s bright and colourful, however, it’s got a simplistic design as well. I never felt overwhelmed by the panels and I could easily distinguish what was going on with the characters and any background action that may be taking place. It was easy on the eyes and easy to engage with.

All in all, an enjoyable and fluffy contemporary graphic novel, and with three unique female protagonists. I’m happy to recommend to those who like University/College style settings and rom/coms.