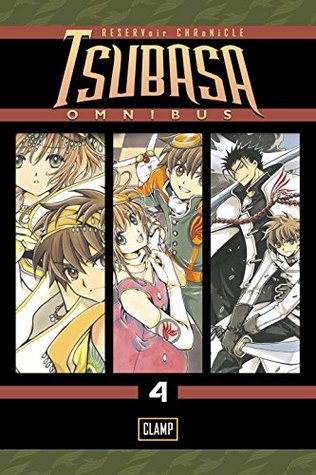 Image Description: the book-cover of Tsubasa Omnibus – Volume 4 by CLAMP. There’s the main title up the top, Tsubasa: RESERVoir CHRoNiCLE Omnibus 4, and there are three verticle bar-shaped images of the book covers of manga volumes 10, 11, and 12. From left to right, volume 10 is an image of Sakura and Syaoran in matching circus/trapeez artist outfits of yellow and green. Volume 11 is an image of Sakura wearing a pink and white racing outfit and Syaoran wearing a green and orange racing outfit. Syaoran and Mokona are wearing racing goggles. Volume 12 is an image of Kurogane and Syaoran wearing matching white outfits, Kurogane is wearing a cape, and both of them are holding swords.

About The Book:
Syaoran and his world-hopping friends find themselves in grave danger as they continue their inter-dimensional search for Princess Sakura’s missing memories! After the godlike Ashura-o kills the mighty Yasha-o, the country of Shura hangs in the balance—and Syaoran will do anything he can to correct the past. Then, the dimension travellers are off to Piffle World, where the prize for the lucky pilot who wins the elusive Dragonfly Race is one of Princess Sakura’s memories! But when contestants are eliminated from the competition unexpectedly, the friends fear that someone may be rigging the race with booby traps. Can the culprit be found before it’s too late? And will any of our heroes emerge victorious? Princess Sakura’s memories—and now their lives—depend on it!

General Observations:
~Character Development – Sakura: A lot of this volume focuses a lot on Piffle World and the Dragonfly Dash. A few of familiar faces also show up as well: Tomoyo from Cardcaptor Sakura, Nokoru from CLAMP School Detective, and Shogo from Volume 2 of Tsubasa: RESERVoir CHRoNiCLE. While the race and preparations for it take up most of the omnibus, this volume also takes the time to develop Sakura’s character and abilities.

Sakura is now at the point where she feels she must be able to contribute to their quest of finding her feathers. Trying not to spoil, I actually think Kurogane was right and the final outcome of the race was needed. It was also a good reminder for Syaoran that he doesn’t need to do EVERYTHING (he’s got a problem with that). Sakura (with the help of Tomoyo) also makes a beautiful coat for Yuuko, so this volume is good at showing Sakura’s talents and her ability to make friends.

~Shipping – Kurogane and Fai: When people ask about the traveling situation, in this volume Fai has taken to telling people that Kurogane is Syaoran and Sakura’s father, and then calling him “Daddy” at every opportune moment. Kurogane’s annoyed expression at being refered to as “Daddy” is priceless and Syaoran’s innocent confusion is an added bonus. I mean, while Kurogane is clearly the over-protective type, I’m fairly certain Kurogane isn’t old enough to be their father, regardless Fai appears to be having entirely too much fun.

~Some Actual Plot Developement: There was Actual Plot(TM) in this volume! An actual plot, not just random moments thrown together, actual plot and good character developement. Fai and Kurogane have taken to have private conversations about how they’ve both noticed the eerie feeling of being watched (a small step but still). It turns out that sending The Feather Squad to the Country of Shara and Shura worlds was a serious Chess-Move on behalf of Yuuko (only the reader knows this).

How do the antagonists respond to this? By sending one of their minions to Piffle world to… follow the Feather Squad around? The minion doesn’t show up until the end and is completely unaffective. It never really felt as though the characters were in any real danger or had anything to lose. I keep being told there’s a big plot twist coming up, however, at this point I truly can not take these antagonists seriously.

All in all, good character developement and a small side order of plot, this volume was engaging and enjoyable. While the villains could step things up a notch (anytime now), the series relies primarily on character interaction and the mysterious moments of characters’ yet-to-be-revealed backstories. I’m happy to recommend.