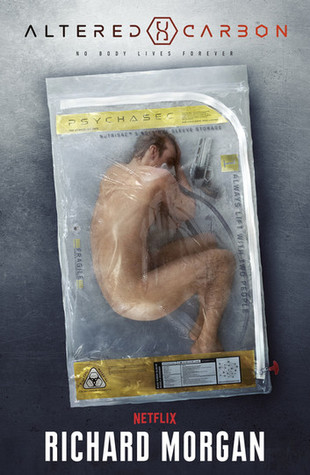 Image Description: book-cover of Altered Carbon by Richard K. Morgan. The cover has a large grey raised surface (think a large grey slab one might find in a laboratory). On top of the raised platform, is a large plastic bag containing a pale-skinned man, curled up in the fetal position within the large plastic bag.

About The Author:
Richard K. Morgan (sometimes credited as Richard Morgan) is a science fiction and fantasy writer. Longer and more extensive bio can be found on his website.

About The Book:
Four hundred years from now mankind is strung out across a region of interstellar space inherited from an ancient civilization discovered on Mars. The colonies are linked together by the occasional sublight colony ship voyages and hyperspatial data-casting. Human consciousness is digitally freighted between the stars and downloaded into bodies as a matter of course.

But some things never change. So when ex-envoy, now-convict Takeshi Kovacs has his consciousness and skills downloaded into the body of a nicotine-addicted ex-thug and presented with a catch-22 offer, he really shouldn¿t be surprised. Contracted by a billionaire to discover who murdered his last body, Kovacs is drawn into a terrifying conspiracy that stretches across known space and to the very top of society.

Content Warning: This novel contains graphic depictions of violence and torture. A dog is also killed in the book (there is a context for this scene but it was still an unpleasant scene to read).

Aspects I Enjoyed:
~Private Detective Plot: When Richard Morgan sticks to the “murder mystery” aspect of the plot, he does really well, figuring out the plot of how Laurens Bancroft ended up dead in his study is actually interesting. There are common problems that occur with crime/mystery novels, one of them is that when the reader figures out the killer the plot does slow a little, however, the mystery plot does pick up speed.

~World Building: The World-Building is complex and detailed. Richard Morgan does indulge in a lot of exposition via Takeshi Kovacs explaining aspects of Envoy Life and Training, however, I found this interesting. Richard Morgan also does enough showing to balance out the telling.

~Interesting Secondary Characters: Takeshi Kovacs has an interesting and engaging cast of supporting and secondary characters. This is justified in-universe as it’s a part of Envoy training to establish a loyal pack of follows. The AI Hotel known as The Hendrix is just as interesting as any person in the novel. I also have a soft spot for The Raven and Poe as well (from the Netflix series).

Aspects I Did Not Enjoy:
~90’s Style Anti-Hero: At this point, the male character arch-type of the 90’s style Anti-Hero, has been done a lot. I’m also not a fan of the first-person perspective. All the men want to be Takeshi Kovacs (or beat the daylights out him), and a lot the female characters want to bang him (this can be a little tiresome after a while). A large section of the plot wouldn’t have worked if Miriam Bancroft didn’t find him attractive.

~Freudian Focus: Combined with the above point, Takeshi Kovacs is a lot like James Bond in a Dystopian Future, which means a lot of the female characters want to bang Takeshi Kovacs (or it’s implied that they do). As a result, Tak mentions his erect penis frequently, and it seemed a tad bit excessive. These sections probably should have edited out or at least reduced.

~Problematic Elements: The book contains a few misogynistic tropes, such as The Disposable Sex Worker and The Madonna/Whore Complex, and it’s never really call out (in the books) for what it is and that it’s wrong. There’s also the fact that one villain is revealed for they are, and there are some consequences for it, however, another villain isn’t held accountable at all. To be honest, it’s why I prefer the ending of the TV series instead, although it’s not without its problems either.

All in all, a Dystopian Science Fiction novel with Hard-boiled fish out of water Private Detective who investigates the decadent lifestyle choices of The One per cent. I’ve noticed that the series is popular, however, due to the problematic stuff, I won’t be continuing with the series.