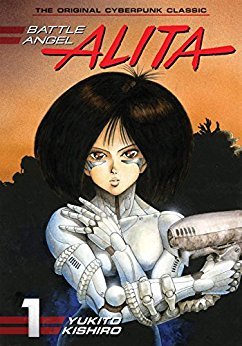 Image Description: Cover the book. The title text in red and white is at the top of the cover. the background is a peach-coloured sunset/sunrise with piles of metal in the background (it’s a scrap-yard). The foreground focuses on Alita, who had shoulder-length poofy brown-hair, a humanoid head, and a mostly cyborg-body. Alita is also holding a gun in one hand.

About The Creator:
A Link to the profile of Yukito Kishiro and the staff he works with.

About The Book:
In the first volume of Yukito Kishiro’s Battle Angel Alita, Daisuke Ido discovers a badly damaged cyborg in the trash heap beneath the floating city of Tiphares, which he rebuilds and names Alita. She has no memory of her previous life, but when she is drawn into a battle with the monster Makaku, Alita realizes that she must uncover the dark secrets of her past.

Kishiro’s story is much more than a science-fiction adventure. Woven into the violent, roller-coaster plot is a strand of philosophical speculation. Battle Angel Alita takes us to a world where technology blurs the boundaries between human and machine, begging the question “What makes us who we are?”

General Observation:
~It’s a Classic: Battle Angel Alita is considered a Classic Cyberpunk/Science Fiction manga series, so while the hair designs may seem a little out of place, the detailed drawing style and graphic design still hold up, which is pretty remarkable as this manga series was published in 1990.

~World Building: When I first read the manga, it wasn’t clear to me at first that the manga takes place on Earth, but apparently it does. Although, it has yet to be explained why Earth has been turned into a dumpster ghetto.

Thus far, the characters belong to a tiered society where the wealthy elite live in a floating platform in the sky, and resources from Earth are sent up via tubes. While everyone else lives in the scrap-yard or worse the sewers.

~Tone Shift: The manga starts out with the predictable but enjoyable “person wakes up in a robot body and doesn’t know who they are” storyline, however, during the course of the first volume it shifts over towards a psychological cat-and-mouse chase between Alita and a parasitical cyborg who is addicted to eating brains.

Of the three volumes that I’ve read so far, there are two major plotlines for the series: the first one is a standard “coming of age” story for a female protagonist. This is combined with the second plotline, which is a disturbing horror show of humans, cyborgs, and robots all living together and the ethical problems involved with that.

Let’s just say the tone isn’t always balanced and it can sometimes have a Mood Whiplash effect.

All in all, an interesting series, and I’m looking forward to getting more answers on how the Earth gets destroyed.