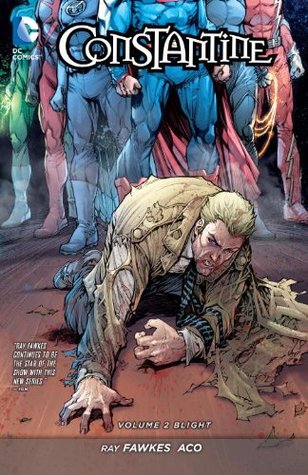 Image Description: book-cover of Constantine – Volume 2: Blight by Ray Fawkes and ACO. The foreground of the image focuses on John Constantine kneeling on the ground, his face bloody, and his long-coat has been shredded. The background of the image is the main members of The Justice League (from the waist down) standing behind Constantine.

About The Creators:
The link provided above.

About The Book:
The star of Justice League Dark and Hellblazer–the longest-running Vertigo series–John Constantine has suffered a major loss at the hands of a former protégé. With his vault of mystical weapons now in the hands of his greatest enemies, John Constantine must battle with Sargon and the Cult of the Cold Flame with all he has left — his wits!

~Narrative Cohesion The 1st volume in the series was super cohesive. Everything connected to the story (character and plot), unfortunately, the 2nd Volume doesn’t continue this pattern. When the narrative focuses on the plot involving Sargon and The Cult of The Cold Flame, the narrative jumps around, and I had to go back and re-read a few pages to figure out what was going on.

~The Justice League are Useless: The Justice League take up the most room on the cover but don’t show up in the comic-book at all. I couldn’t help but find it rather anti-climatic. Halfway through Volume 2, The ENTIRE Justice League is taken out of action (perhaps it’s explained in a companion series), either way, it looks pretty bad for the Justice League.

¬Loads and Loads of Characters: Due to the fact that the ENTIRE Justice League is out of action, Constantine is forced into gathering as many remaining mages left and convincing them to assist him against the mutual threat known as Blight.

I’m given the impression I am already supposed to know who these characters are, given that there is little in the way of introduction and backstory, however, I don’t know a lot about Vertigo Comics and I’m a new-comer to the Hellblazer/Constantine series.

So, this could just be me, but it’s jarring and disorientating to be “introduced” to a whole bunch of new characters, with little to no information as to how they connect to Constantine and the “Blight” narrative as a whole.

It’s not that I dislike these new characters, some of them are quite interesting, I just don’t have any emotional attachment to them. I don’t know who they are and I don’t know why I should care about them.

~Constantine Has A Point There’s a section in the comic where Constantine and his rag-tag bunch of misfits end up on the shores of Heaven. Constantine does this as a way of a tactical retreat, however, they are greeted by The Spectre, The Voice of God (in the form of a small brown terrier), and an Angel.

Constantine raises the valid point that The Voice of God and The Spectre could solve the problem that Blight represents, however, they “choose” to do nothing. I would also argue that the help The Voice of God does offer isn’t particularly effective.

The Spectre, supposedly an agent of good, could easily defeat the two villains involved, and yet spends the entire time asking The Voice of God for permission to kill Constantine (this makes sense in context). From the perspective of plot-development; I get why the narrative is unfolding in this particular manner.

Just like with The Justice League, if The Spectre could just step in and interfere at anytime, the narrative would be short and boring. Conflict is important to a narrative, however, Constantine’s perspective is completely justified in the face of this absurd level of inaction.

All in all, although there are a few good issues/scenes, however, the narrative and the characters are messy and all over the place. I’m hoping that Volume 3 will make more sense or at least puts some more plot-pieces together.