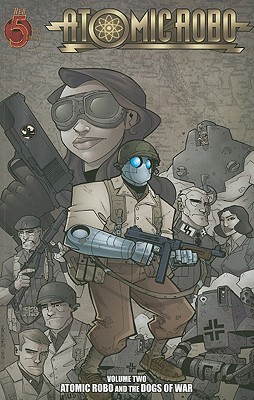 Image Description: book-cover of Atomic Robo & The Dogs of War by Brian Clevinger and Scott Wegener

About The Creators:
The relevant links are available above.

About The Book:
Eisner-nominated Atomic Robo lands on the front lines of World War II against the science freaks and devastating weird weaponry of Nazi Germany — from invincible walking tanks to atomic-powered weather cannons to the Monster Soldiers of the Third Reich. Can ROBO and The Sparrow, Britain’s greatest covert operative, complete their mission and turn the tide of the war without killing one another? Collect the best-selling graphic novel, Atomic Robo: Dogs of War five-issue mini-series. Complete with cover gallery, pin-ups, and bonus stories.

General Observation:
~Collection of Short Stories: Unlike the previous volume, this volume feels more like a collection of short stories, rather than a cohesive whole narrative. This isn’t necessarily a bad thing. While these flashbacks to Atomic Robo’s missions during World World One and Two are interesting, however, this creates the problem of a jumpy timeline, and it’s a tad disorientating.

~Sliding Scale of Plot versus Character: The Atomic Robo series tends to focus on events and action, rather than people, so I feel as though Atomic Robo sits more towards the plot end of the scale, however, I would also like to clarify that it doesn’t mean there isn’t any character development at all. I think this volume reflects a lot on Atomic Robo’s character and, seeing as he’s the main character, this shouldn’t come as a surprise. It’s interesting to see the revolving door of human friends and associates Atomic Robo gains over time.

~Jumpy Timeline: To be honest, I probably would have given this volume 5 stars if the order of the issues made more sense to me, there didn’t appear to be a strong connection or coherent timeline to the missions. I couldn’t figure out why the readers should be focusing on these missions. I mean, one issue focuses on Atomic Robo fighting a giant crab on a beach, and I honestly couldn’t figure out how it related to his mission with the Egyptian Pyramids in Volume 1 or his mission with The Sparrow.

All in all, an interesting and humourous collection of adventures featuring Atomic Robo, I’m sure there’s a reason why these issues have been included in this volume, I just wish I could figure out what the reason was. Perhaps this will be clarified in another volume.