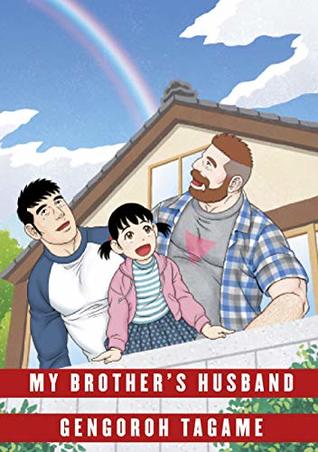 Image Description: The book-cover of My Brother’s Husband – Volume 2 by Gengoroh Tagame

About The Author:
Gengoroh Tagame was born in 1964 and lives in Tokyo. After graduating from the Tama University of Art, Tagame worked as an Art Director while writing manga and prose fiction, contributing illustrations for various magazines. In 1994, he co-founded the epochal G-Men Magazine and by 1996 he was working full-time as an openly gay artist. He is the author of dozens of graphic novels and stories, which have been translated into English, French, Italian, and Korean. His artwork has been exhibited in galleries across Europe and America. My Brother’s Husband marks his first all-ages title and earned him the Japan Media Arts Award for Outstanding Work of Manga from the Agency of Cultural Affairs.

About The Book:
The concluding volume in the story of Yaichi, his daughter Kana, and how their meeting Mike Flanagan – Yaichi’s brother-in-law – changes their lives and their perceptions of acceptance of homosexuality in their contemporary Japanese culture.

As Mike continues his journey of discovery concerning Ryoji’s past, Yaichi gradually comes to understand that being gay is just another way of being human. And that, in many ways, remains a radical concept in Japan even today. In the meantime, the bond between Mike and young Kana grows ever stronger, and yet he is going to have to return to Canada soon – a fact that fills them both with impending heartbreak. But not before more than a few revelations come to light.

General Observation:
~Right In The Feels: This is is the final part in the two-part series and this volume is super bittersweet. The fact that Mike will eventually have to return to Canada hangs overall interactions and fun moments. In this volume, it is revealed that Ryoji’s best friend in High School, Katoyan, was also gay, which makes a lot of sense.

The sad part is because the stigma around being a homosexual man in Japan, Katoyan only feels comfortable talking to Mike in a private setting, and Yaichi will probably only be vaguely aware or never know at all about Katoyan and Ryoji’s friendship either. Both Yaichi and Katoyan had to wait until Mike showed up so that they could truly process Ryoji’s death and get some sense of closure.

It makes me wonder what would have happened to these two men if Mike had decided not to come to Japan (for whatever reason).

~Amicable Exes: It’s enjoyable watching Yaichi and Natsuki get along and help each other the way they do. It’s great how Natsuki is able to give good advice and act as a good sounding board for Yaichi’s concerns. Kana’s well-being is always at the centre of their conversations.

~Character Development – Yaichi: At the beginning of Volume 1, Yaichi is a guy with passive homophobic thoughts and attitudes towards gay men, however, Yaichi becomes a guy who realises the flaws in this type of thinking, Yaichi also stands up for Mike, and actively rejects homophobia from other people as well. It’s painful but important that Yaichi is able to self-reflect and realises that his own behaviour was a factor as to why Ryoji left Japan to live in Canada.

All in all, this volume is a serious tear-jerker, however, it’s a great conclusion to the series. I am happy to recommend this manga series.