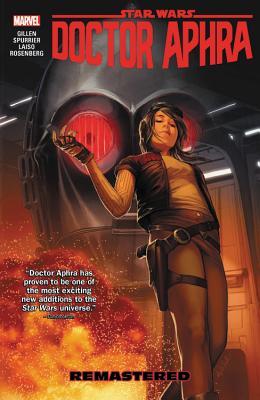 About The Creators:
The relevant links are available above.

Rogue archaeologist Doctor Aphra jumps to lightspeed and accelerates into the next chapter of her life! The not-so-good Doc is being blackmailed by evil droid mastermind Triple-Zero to run missions for his underground crime syndicate — but that doesn’t mean she can’t cause trouble and have fun along the way! Her latest assignment? Infiltrating a secret Rebellion training centre run by General Hera Syndulla. Aphra is used to being in way over her head, but this time she’s not alone! Who else is caught up in her latest misadventure? Let’s hope they’re friendly — otherwise, Aphra may have finally bitten off more than she can chew! Hunted by both Hera of the Rebellion and Tolvan of the Empire, Aphra’s got a lot on her mind — but she’s always got a few tricks up her electro-sleeve!

Yar! Thar Be Spoilers Ahead! Ye Have Been Warned

General Observation:
~Sliding Scale of Plot versus Character: For the first three volumes of the series, Kieron Gillen has been the lead-writer for Doctor Aphra series, however, Simon Spurrier will either be a co-writer or lead-writer for the series from this point onwards. While there hasn’t been a deterioration of enjoyment since Simon Spurrier has joined the creative team, however, I have noticed a slight shift towards the Plot end of the Scale.

In this volume, the reader starts in Media Res with Doctor Aphra already being forced to work for Triple-Zero, and the narrative works backwards from there to explain how it happened. Since Doctor Aphra is barely managing to stay one step ahead of Triple-Zero’s Space Heist, her planning process seems more ad-hock than usual, this could have been poorly handled, however, the creative team involved managed to avoid this and blend the Plot and Character elements together.

~Off-Screen Plant/On-Screen Pay-Off: As I mentioned previously, Doctor Aphra’s planning process seems more ad-hock than usual, combined with super-fast narrative pacing, this has resulted in off-screen planning and on-screen implementation. The reader gets to see the pay-off but not the setup, which makes the plot more difficult to follow and could result in confusion.

To be honest, this felt distasteful to me, it seemed as though Doctor Aphra crossed a line, and I don’t think that she’ll be able to come back from it. While I enjoyed this volume, and I felt the plot worked overall, I can understand readers feeling annoyed at having information withheld from them for the sake of a plot-twist. I can also understand if some of Doctor Aphra’s maneuvers come across as an arse-pull

~Not So Different: This volume has resulted in a few comparisons between Triple-Zero and Doctor Aphra. They are not favourable comparisons.

All in all, a fascinating Space Heist with a long-lasting psychological impact on those who have managed to survive the experience, and I highly recommend this volume. I have a feeling this will be a turning point for the Doctor Aphra series.