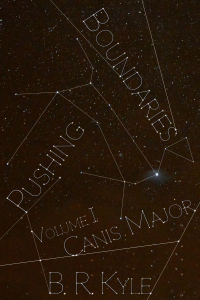 Volume I: Canis Major
James McKenzie, a computer programmer and karate enthusiast, with the help of his best friend and private investigator, Justine Jones, is tracking down local corrupt police officers. Together, they convinced the Gangs and Organised Crime Unit of Specialist Crime & Operations that the Acker family are worth investigating. With a little luck, James and Justine may meet their goal for an arrest and conviction.

Beth Smith, an future primary school teacher, is travelling to the UK for the first time. She just wants to leave her family drama back home in Australia, especially since her family has only a theoretical concept of personal boundaries. She wants nothing to do with James’ complicated family drama or his and Justine’s under-cover drug investigation.

Volume II: Orion
Operation Nightshade is about to commence, the undercover operatives are moving into position and the target contact, Cassandra Acker, has been acquired. John
Smith’s undercover agent is struggling to establish contact, while John just thinks it’s bad timing, however, James thinks it’s more sinister, especially when he discovers Cassie’s phone number on a piece of paper in Beth’s bedroom.

Beth has absolutely no desire to go undercover, yet is torn between two powerful factions: Uncle John and Justine, fighting for the justice a dead journalist deserves, versus Cassie, a nineteen-year-old woman who is just trying to get out a bad family situation—a situation with which Beth is uncomfortably familiar.

James feels that Beth is sabotaging Operation Nightshade from within. The more time Beth spends with Cassie, though, the more Beth comes to agree with him. Is it possible for her to help both John Smith and Cassie Acker?

Beth doesn’t have all the answers, but she’s going to find out